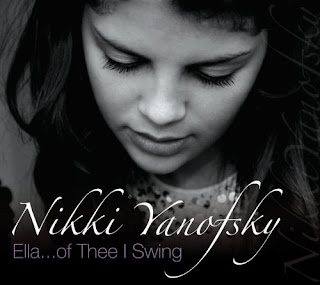 Nikki Yanofsky is a 16-year-old musical prodigy. Since her debut at the 2006 Montreal International Jazz Festival, where she won the hearts of the 100,000+ audience, Nikki has never looked back. She was the youngest singer ever on a Verve Records release when she recorded “Airmail Special” for the Ella Fitzgerald tribute album, We All Love Ella: Celebrating the First Lady of Song, alongside such musical
luminaries as Etta James, Linda Ronstadt, Diana Krall and Natalie Cole. She has also recorded the swing-era classic, “Stompin’ at the Savoy” with Grammy Award-winning artists Herbie Hancock and Will.i.am for Kareem Abdul-Jabbar’s audio book, On the Shoulders of Giants. Also, in the realm of popular music, Nikki was asked to
record “Gotta Go My Own Way” for Disney’s smash hit High School Musical 2. The song was included in French and English on the Canadian release of the soundtrack, and in the bonus features of the worldwide DVD release. Nikki has also starred with renowned hip-hop artist Wyclef Jean on episodes of PBS' current version of The
Electric Company and has been broadcast internationally on PBS’s youth talent showcase From the Top. In 2008, Nikki released Ella… of Thee I Swing – a live CD/DVD package recorded in Montreal.

Garnering critical acclaim, it earned Nikki two Juno nominations including New Artist of the Year and Vocal Jazz Album of the Year. Most recently, Nikki was a featured artist at the 2010 Olympic and Paralympic Winter Games held in Vancouver. Performing at the opening and closing ceremonies of the Olympics as well as the opening ceremony of the Paralympics, Nikki was introduced to a world-wide audience.
Nikki was also chosen to sing “I Believe,” the anthem of Canada’s Broadcast Consortium. Written by Stephan Moccio and Alan Frew, this song quickly became a #1 hit on iTunes Canada and the Billboard Canada Top 100 chart. The single had the highest first-week sales of any Canadian artist in SoundScan history and was certified quadruple-platinum. That same week, Ella… of Thee I Swing went back to the top of the iTunes Canada Jazz Albums Chart and her single “I Got Rhythm” went to the top of the iTunes Canada Jazz Songs Chart. This was the first time since the inception of digital downloading that an artist has held these #1 positions concurrently.

Nikki has used her budding fame to help the underprivileged – becoming an ambassador for the Montreal Children’s Hospital, The Children's Wish Foundation and MusiCounts. Nikki has also recently joined her fellow Canadian artists in recording K’Naan’s
“Wavin’ Flag” for Young Artists for Haiti. Being sold on iTunes as a single and video, the proceeds will directly impact the lives of children, families and communities in Haiti through the relief and rebuilding efforts of Free the Children, War Child Canada and World Vision Canada. The local, national and international charity events that Nikki has been involved with to date have raised well over
$10 million.

Already a veteran of the touring circuit, Nikki has played to sold-out crowds at jazz festivals in Montreal, Toronto, Sapporo and Montego Bay, played Carnegie Hall, The Kennedy Center and Avery Fischer Hall with renowned composer and conductor, Marvin Hamlisch and has performed before full houses at Dizzy's in New York City's Jazz at Lincoln Center, the famed Catalina's Jazz Club in Los Angeles and even Tokyo’s historic Kabuki-za.

Nikki’s first studio album, Nikki, will be released by Decca Records in the spring of 2010. Produced by 15-time Grammy Award-winning producer Phil Ramone, it features new arrangements of classic jazz songs as well as some of Nikki’s first original music. It includes collaborations with fellow Canadian Ron Sexsmith and Grammy
Award-winning songwriter Jesse Harris as well as a song written for Nikki by Feist.
The summer of 2010 is already filling up with international tour dates. Canadian, US, UK, Japanese and European tours are all in the works including her fifth straight appearance at the Montreal International Jazz Festival.
Posted by Jazz n Bossa at 8:17 AM No comments:

Born in New York City, Sandy began her recording career with the highly acclaimed vocal trio Pastiche, with whom she recorded two CDs, "That's R&Bebop" (Pony/Canyon/Nova) and "Remember That" (BluePrint). In 1992, Sandy began a solo career parallel to working with Pastiche, and in 1996 joined keyboardist Marcos Silva, for a steady gig at Caf»Bastille, a San Francisco jazz bistro. Silva, formerly musical director and arranger for Flora Purim and Airto, who has also worked with Toninho Horta, Dori Caymmi and other Brazilian greats, shared her passion for the music. Over a period of two years they developed an extensive repertoire, musical interplay and following in the San Francisco Bay Area.

In 1997, Sandy was featured on the debut release "Intercambio" (Good Omen,), by young Brazilian jazz harmonica player Damien. Her love of languages and world music has led her to become a much-in-demand session vocalist for Latin and World Music artists. Sandy often performs with Rebeca Mauleon-Santana, Orquesta Candela, and Jai Uttal and the Pagan Love Orchestra. Sandy also composes songs for television and films, and most recently contributed a song, "Island Ways" to the film "Lulu on the Bridge" starring Harvey Keitel, Mira Sorvino and Vanessa Redgrave.

Sandy teaches vocal technique and style at two studio locations in San Francisco and at Blue Bear School of American Music. Sandy also coaches vocal groups and bands on harmony and blend and does vocal production in the studio. Most recently, she arranged and produced the vocals for Dr. Loco and the Rockin' Jalape³o Band's CD "Puro Party" (Flying Fish Records). Sandy is an associate of instructor Seth
Riggs, creator of the Speech Level Singing technique.
Posted by Jazz n Bossa at 11:01 PM 1 comment: 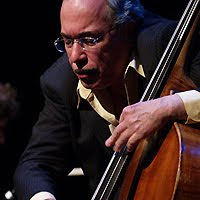 Born in 1944 in Santurce, Puerto Rico, Eddie moved to New York City with his family at an early age. His love of music led him to the double bass as a precocious 11-year old student in the public school system. Two years later he was accepted to the High School of Music and Art and soon began private studies with the great double bass teacher Fred Zimmerman. During these years, he performed with many
professional dance bands and was a member of the Newport Youth Band led by Marshall Brown. By 18, he had performed with such jazz luminaries as Buck Clayton, Marian McPartland and Paul Bley.

In the spring of 1966, both Mulligan’s group (with Eddie on bass) and the Bill Evans Trio performed for a week at the famed Village Vanguard. That week at the Vanguard
changed Eddie’s life forever. When Bill Evans heard the young phenom,
he practically hired him on the spot. Bill called a few weeks later and
Eddie’s dream had been realized. At age 21, he was the bassist with
the Bill Evans Trio – and rose quickly to fame. TIME magazine declared
in its review of the trio’s first recording, “Eddie Gomez has the world
on his strings.”

Joining the Bill Evans Trio was indeed a turning point in Eddie’s career. He had arrived in a big way and the jazz community took notice. For 11 years, Eddie played an integral role in the Bill Evans Trio’s sound and evolution. This period
of vast artistic growth with Bill Evans included performances throughout the United States, Europe, South America and Asia, as well as dozens of recordings – two of which won GRAMMY® awards. During this time, Eddie also realized another dream
performing on many occasions with the great Miles Davis, in the Davis
quintet that also featured Wayne Shorter, Herbie Hancock and Tony Williams.

EDDIE GOMEZ, Steve Gadd, and Richard Stoltzman are Special Guest Artists with Mika Yoshida (2008) In the classical music world, Eddie has been a guest artist with
The Kronos Quartet, Tashi Ensemble, Japanese marimbist Mika Yoshida and clarinetist Richard Stoltzman. His recordings with Stoltzman have included “Begin Sweet
World” and most recently “The Goldberg Variations” and other pieces by
Johann Sebastian Bach. At Carnegie Recital Hall, Eddie premiered a
musical piece written specifically for him by William Thomas McKinley.

In popular music, Eddie has performed and recorded with artists such as
Bobby Darin, Tim Hardin, Carly Simon, Art Garfunkel, Mark Knoffler, Michael
Franks, Judy Collins and Jennifer Holliday. He has also been a member
of “The Gadd Gang,” Steve Gadd’s All Star R&B/jazz band. Today, Eddie tours and records with his own group, which he formed in 1992 with pianist Stefan
Karlsson and legendary drummer Jimmy Cobb. The group’s recordings
include “Live in Japan,” “Dedication” and “Uptown Music.” He is
composing for his own projects as well as for film and television most notably
for the prize-winning William Steig animation, “The Amazing Bone.” Eddie Gomez continues to enjoy an active, international career as a performer, recording
artist, composer, educator and featured guest artist on many high profile projects.


Eddie’s recent recording “Duets,” co-led with Carlos Franzetti on piano, won
Best Instrumental Album at the 10th Annual Latin GRAMMY® Awards. His recordings as a leader include “Next Future,” “Outlaws,” “Live in Moscow,” “Street Smart,”
“Power Play,” “Mezgo,” “Discovery,” “Gomez,” “Down Stretch,” “What’s New at F, “Palermo” and “Trio.” The recordings feature guest artists including Michael
Brecker,Richard Tee, Randy Brecker, Al Foster, Steve Gadd, Chick Corea, Jeremy Steig, Jack McDuff and John Abercrombie. His recordings co-led with pianist Mark Kramer include “Entropy,” “Fiddler on the Roof” and “Art of the Heart.” In 2006, his DVD “An Evening with Eddie Gomez” was released – with Eddie and Mark Kramer performing and lecturing on the intricacies and dynamics of improvisation.
A sought-after educator, Eddie is Artistic Director at the Conservatory of Music of Puerto Rico where he has been professor and artist-in-residence since 2005. He has been artist-in-residence and associate professor of jazz double bass at the Oberlin Conservatory of Music and recently was resident artist at Stanford University, North
Texas State University, Georgia State University, Jacksonville University,
and the prestigious Berklee College of Music. He gives master classes at many of the major universities and conservatories throughout the United States, Europe, Japan and South America.