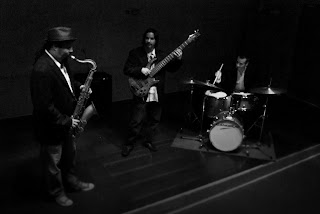 San Juan Collective is a contemporary jazz trio from Puerto Rico that represents a new breed of jazz players. Two times Latin Grammy Nominees for their work with Charlie Sepulveda & the Turnaround, this saxophone, bass and drums trio based their concept in collective improvisation using original compositions as a base to give free rein to their creativity. Each musician brings all his influence from jazz, Afro Caribbean to classic and world music bringing a unique sound to the trio.

This musicians had participated in various recordings and had played with different artists individually and as a part of a same group were they met and start to jam as a trio to experiment with various compositions and concepts, and creating the San Juan Collective.

His musicianship includes performance with both, acoustic and electric bass. Gabriel has written educational tips columns and a manual for the development of harmony and technique. He is member of the Puerto Rico’s Conservatory of Music jazz program faculty where he teaches electric and acoustic jazz bass.

Drummer/Composer and Two Times Latin Grammy nominee Raul Maldonado for his work with"CHARLIE SEPULVEDA AND THE TURNAROUND" May 2008, and ‘’SEPULVEDA BOULEVARD’’ April 2009 in which Raul recorded all drums, have received excellent reviews and been nominated for a Latin Grammy as Best Latin Jazz Albums of the year.

Ever since childhood Raul has been fervent researcher of the Latin roots rhythms. BA in Drums Performance at Interamerican University, also studied at Drummers Collective in New York with Kim Plainfield and Michael Laurence. Among his teachers and mentors are Anthony Carrillo, Giovanni Hidalgo and Hector Matos and Paoli Mejias. 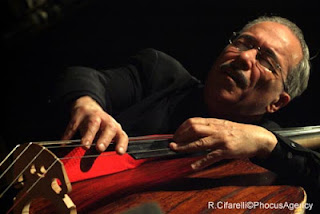 Joining the Bill Evans Trio was indeed a turning point in Eddie’s career. He had arrived in a big way and the jazz community took notice. For 11 years, Eddie played an integral role in the Bill Evans Trio’s sound and evolution. This period of vast artistic growth with Bill Evans included performances throughout the United States, Europe, South America and Asia, as well as dozens of recordings – two of which won GRAMMY® awards. During this time, Eddie also realized another dream performing on many occasions with the great Miles Davis, in the Davis quintet that also featured Wayne Shorter, Herbie Hancock and Tony Williams.

In 1977, Eddie left the Evans Trio to explore new musical territory. For the next decade, he performed in many diverse musical contexts, working with Dizzy Gillespie, Freddie Hubbard, George Benson, McCoy Tyner, Hank Jones, Nancy Wilson, Tania Maria, Ray Barreto, the All Star groups “Steps Ahead” and “New Directions” and many others, as well as on GRAMMY®-winning recordings with Chick Corea.

Today, Eddie tours and records with his own group, which he formed in 1992 with pianist Stefan Karlson and legendary drummer Jimmy Cobb. The group’s recordings include “Live in Japan,” “Dedication” and “Uptown Music.” He is composing for his own projects as well as for film and television most notably for the prize-winning William Steig animation, “The Amazing Bone.” Eddie Gomez continues to enjoy an active, international career as a performer, recording artist, composer, educator and featured guest artist on many high profile projects.

Eddie’s recent recording “Duets,” co-led with Carlos Franzetti on piano, won Best Instrumental Album at the 10th Annual Latin GRAMMY® Awards. His recordings as a leader include “Next Future,” “Outlaws,” “Live in Moscow,” “Street Smart,” “Power Play,” “Mezgo,” “Discovery,” “Gomez,” “Down Stretch,” “What’s New at F, “Palermo” and “Trio.” The recordings feature guest artists including Michael Brecker,Richard Tee, Randy Brecker, Al Foster, Steve Gadd, Chick Corea, Jeremy Steig, Jack McDuff and John Abercrombie. His recordings co-led with pianist Mark Kramer include “Entropy,” “Fiddler on the Roof” and “Art of the Heart.” In 2006, his DVD “An Evening with Eddie Gomez” was released – with Eddie and Mark Kramer performing and lecturing on the intricacies and dynamics of improvisation.

A sought-after educator, Eddie is Artistic Director at the Conservatory of Music of Puerto Rico where he has been professor and artist-in-residence since 2005. He has been artist-in-residence and associate professor of jazz double bass at the Oberlin Conservatory of Music and recently was resident artist at Stanford University, North Texas State University, Georgia State University, Jacksonville University, and the prestigious Berklee College of Music. He gives master classes at many of the major universities and conservatories throughout the United States, Europe, Japan and South America.