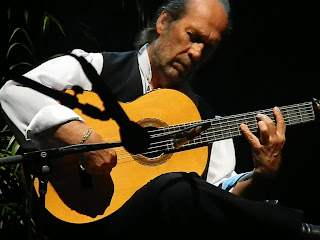 Paco de Lucía was one of the greatest living guitarists in the world. He was born Francisco Sánchez Gómez in Algeciras, a city in the province of Cádiz, in the Southernmost tip of Spain on December 21st, 1947. His stage name was an homage to his mother Lucía Gómez.

His father, Antonio Sánchez, a day laborer, played guitar at night as a way to supplement his income. He, Paco's elder brother Ramon de Algeciras and flamenco master Niño Ricardo were de Lucía's main influences. His first performance was on Radio Algeciras in 1958. The brothers Ramon, Pepe (a singer) and Paco now compromise half of the Paco de Lucía sextet.

The training ground for a flamenco guitarist, de Lucía once said, "is the music around you, made by people you see, the people you make music with. You learn it from your family, from your friends, in la juerga (the party) drinking. And then you work on technique. Guitarists do not need to study. And, as it is with any music, the great ones will spend some time working with the young players who show special talent. You must understand that a Gypsy's life is a life of anarchy. That is a reason why the way of flamenco music is a way without discipline, as you know it. We don't try to organize things with our minds, we don't go to school to find out. We just live... music is everywhere in our lives."

In 1958, at only age 11, de Lucía made his first public appearance and a year later he was awarded a special prize in the Jerez flamenco competition. At 14 he was touring with the flamenco troupe of dancer Jose Greco. He worked with Greco for three seasons.

It was while on tour with Greco in the United States that de Lucía met the great Sabicas, an influential guitarist whose name became synonymous with flamenco n the U.S., who encouraged him to pursue a more personal style. de Lucía would follow Sabicas' advice a few years later in his debut at Carnegie Hall in 1970.

",i>In flamenco, the guitarist first and foremost, must not get in his way of the singer," de Lucía once explained. "There is a dialogue going on. The cantaor (singer) sings the words. There are no songs per se in flamenco, just short lyrics, so the guitarist follows the call of the singer. Part of the tradition in flamenco is not playing too hard or too much. You need to support the singer, help him."

Back in Spain, he joined Festival Flamenco Gitano, an annual flamenco showcase tour that lasted for seven years, and recorded his first album in 1965, at the age of 18.

With La Fabulosa Guitarra de Paco de Lucía, released in 1967, de Lucía began to distance himself from the influence masters such as Ricardo and Mario Escudero and by Fantasia Flamenca, recorded in 1969, he had defined his own style. His superb technique was displayed in well structured pieces that departed from the flamenco tradition of theme and variations.

In 1968, he met Camarón de la Isla, one of the premier flamenco singers. Their association has been chronicled on more than 10 records. In fact, their album Potro de Rabia y Miel (1991), the first by them since 1984, was perhaps the last release by Camarón de la Isla, who died in 1992.

De Lucía's new style became more evident in El Duende Flamenco (1972). Fuente Y Caudal (1973) (which included the hit Entre Dos Aguas) and Almoraima (1976) which some consider a masterpiece. They were followed by Paco de Lucía Interpreta a Manuel de Falla (1980), a superb tribute to the classical composer who was an admirer of flamenco music, and, in 1981, Solo Quiero Caminar.

He has been criticized by flamenco die hards for his forays into other styles (his own sextet, organized in 1981), includes bass, drums, and saxophone) and his high profile collaborations, especially with jazz musicians, most notably with pianist Chick Corea and fellow guitarist John McLaughlin, Larry Coryell and Al DiMeola. But the often dazzling results of these collaborations have been documented in several releases including the guitar trio albums Castro Marin (1979), Passion Grace and Fire (1982) and Friday Night in San Francisco (1981). He has also recorded soundtracks for films such as Carlos Saura's Carmen, Borau's La Sabina, and the ballet Los Tarantos, presented at Madrid's prestigious Teatro de la Zarzuela in 1986.

However, as if to make a point, de Lucía returned to pure flamenco with a vengeance in the spectacular Siroco (1987), a brilliant summations of his style, and then zigzagged back towards fusion with Zyryab (1990), which featured his sextet augmented by pianist Chick Corea.

De Lucía shrugged off the complaints or the concerns that he might lose his roots or betray the essence of flamenco. "I have never lost my roots in my music, because I would lose myself," he once said. "What I have tried to do is have a hand holding onto tradition and the other scratching, digging in other places trying to find new things I can bring into flamenco."

"There was a time when I was concerned about losing myself," he added, "but not now. I've realized that, even if I wanted, I couldn't do anything else. I am a flamenco guitarist. If I tried to play anything else it would still sound like flamenco."

In 2004, Paco de Lucia won the 2004 Prince of Asturias award of the Arts. This is the most important and prestigious award of its kind given in Spain. The other contenders were American rock musician Bruce Springsteen, French dancer Maurice Bejart and British composer Andrew Lloyd Webber.