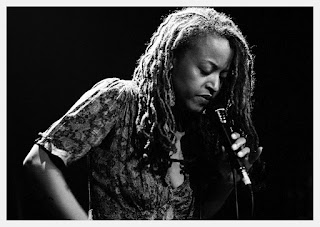 By now, it has become almost pointless to write that Cassandra Wilson is the most prominent jazz vocalist of her generation. Her recordings have sold hundreds of thousands of copies, astounding numbers for a jazz artist. But what is most remarkable about Wilson is her ability to woo a crossover audience with U2 and Monkees covers, while at the same time retaining her credibility with hardline jazz aficionados. The key to this tough balancing act lies in her deeply-ingrained jazz sensibility, an approach that brings a smoky edge to even her most pop-based songs. As diverse as her influences are, the underlying approach is all jazz.

Wilson was born Cassandra Marie Fowlkes in 1955 in Jackson, Mississippi. Her father, Herman B. Fowlkes, was a jazz guitarist. He made sure that there was plenty of music around the house--both in the number and variety of instruments lying about, and in his collection of recordings by jazz greats such as Miles Davis, Ella Fitzgerald, and Thelonious Monk. Although he gave up performing professionally once Cassandra was born--he turned down a chance to tour with Ray Charles in order to spend more time with his family-- Fowlkes encouraged his daughter's musical aspirations from the start. At her father's urging, Cassandra studied piano, both classical and jazz, beginning when she was about six years old. A few years later, he began teaching her guitar chords, and by the time she was a teenager, Cassandra was writing her own songs. Her tastes at the time ran toward the folk stylings of Joni Mitchell, Judy Collins, and Joan Baez, and her early compositions reflected that preference.

After graduating from high school, Wilson began making the local rounds as a guitar-strumming folk singer, while attending Milsaps College. During the mid-1970s, she landed a weekly Tuesday night gig at a folk club near the college. In 1981 Cassandra married Anthony Wilson, and about the same time she gave up singing for a while. She went back to school, this time at Jackson State University, and received a degree in communications. Wilson and her husband then moved to New Orleans, where she hoped to begin a career in broadcasting. Perhaps it was something in the New Orleans air that made Wilson start thinking about singing again. Working days as the assistant public affairs director of a local television station, she spent her evenings sitting in with notable New Orleans jazzers like Earl Turbinton and Ellis Marsalis (father of stars Wynton and Branford).

After a year in New Orleans, Wilson moved to New York. Unable to find a regular day job, she began showing up at jam sessions, and soon became a regular at several of them all over town. She became primarily an interpreter of jazz standards, in the Betty Carter mold. The event that changed--or started, really--Wilson's career came in 1983, when she met saxophonist-composer Steve Coleman, leader of the avant-garde jazz collective M-Base, known for its cutting-edge mixture of jazz improvisation and contemporary urban rhythms, such as funk and hip-hop. Coleman's influence on Wilson's development as a musician was profound. He encouraged her to look beyond bebop, and to begin composing her own original material. Gradually, Wilson began to forge her own stylistic direction, without abandoning her beloved standards entirely.

Wilson worked with Coleman quite a bit over the next several years. She made her recording debut on Coleman's 1985 release Motherland Pulse. She made her first solo album, Point of View, the following year, taking only two days to record and mix it. Another solo effort, Days Aweigh, released in 1987, took four days to make, with Wilson doing most of the production herself. These early recordings show Wilson at her most mystical lyrically, singing dreamy, metaphysical words over a variety of grooves that contain hints of funk, fusion, and reggae. A year later, she changed direction entirely with the release of Blue Skies, a collection of jazz standards by the likes of Irving Berlin and Johnny Mercer. It featured a conventional jazz trio of piano, bass, and drums. Blue Skies sold nearly ten times as many copies as either of her previous recordings, and was the top selling jazz album in 1989.

Over the next few years, however, Wilson struggled to develop a coherent musical vision. Torn between her own eclectic tastes and the demands of her record company to produce conservative hits, she ended up satisfying neither. Her 1991 release, She Who Weeps, failed to generate the kind of attention that Wilson had hoped for. By the early 1990s, Wilson had veered away from jazz standards, and was now exploring more of a black pop angle with her music. Her 1992 release Dance to the Drums Again made use of such pop tools as drum machines and synthetic strings. The following year, Wilson signed with the Blue Note label and hooked up with producer Craig Street. This formula proved to be a winner. Street convinced Wilson to abandon her plan to release a collection of Southern soul music, and to instead look inward to the music that she had enjoyed since her teens, including that of folk-inspired performers such as Bob Dylan, Neil Young, Bonnie Raitt, as well as the 1970s pop that had shaped her musical sensibilities.

The resulting album was Blue Light 'Til Dawn, considered by many to be Wilson's strongest project to date. Blue Light contained material by, among others, Joni Mitchell, the Stylistics, and pioneering Delta bluesman Robert Johnson. The recording made Wilson a crossover sensation, leading to a string of four consecutive years as Down Beat magazine's top female jazz vocalist. There seemed to be something on the album for everybody. Serious jazz fans looked at Wilson's spare arrangements and desire to cover pop tunes, and drew parallels with Miles Davis. Intellectuals started calling her "post-modern." Pop fans just dug the songs. The success of Blue Light also created quite a bit of demand for Wilson's services on other people's projects. Wynton Marsalis asked her to sing the lead on Blood on the Fields, his three-hour, Pulitzer Prize-winning orchestral jazz composition that premiered at New York's Lincoln Center in the spring of 1994, and later spawned a recorded version. She was also tapped to sing the title track on When Doves Cry, a tribute album to the Artist Formerly Known As Prince. In addition, Van Morrison liked her version of his song "Tupelo Honey" so much that he specifically invited her to cover another one of his songs.

Joining forces with Street once again, Wilson repeated her winning formula on the 1996 release New Moon Daughter. Like Blue Light, New Moon Daughter contained songs written by several 1970s icons that had helped to shape Wilson's ear. Covers included Monkees hit "Last Train to Clarksville;" Neil Young's "Harvest Moon"; and "Love is Blindness" by U2. Also on the album were songs by Hank Williams, Hoagie Carmichael, and Son House. Again the orchestration was bare- bones, allowing Wilson's voice to take center stage throughout. The praise lavished on Wilson following the release of New Moon Daughter was so unanimously glowing it became almost trite. Greg Tate, writing in Essence, called her "the most original jazz vocalist of her generation." To Chris Norris of New York magazine, she is "jazz's most sensual and fearless vocalist." Time crowned her "the queen of contemporary jazz vocalists and the true heir of Billie Holiday and Sarah Vaughan."

Touring endlessly throughout the United States, Europe, and Japan, Wilson has begun to attain a level of stardom rarely enjoyed these days by anyone involved in jazz. As John Ephland of Down Beat pointed out in 1995, the secret is her ability to "criss-cross the boundaries between jazz and pop with such reverence and authenticity." Rather than alienating either camp, she delights both of them. As her producer Street put it, "it doesn't matter what Cassandra does, it all comes out sounding like Cassandra, and it all comes out sounding like jazz."