Jazz and Bossa Artist of the Month ( June 2012 ) - Esperanza Spalding 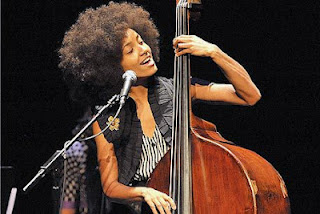 From the beginning of her life to her current success as a creative musician, Esperanza Spalding has charted her own course. The young bassist/vocalist/composer was one of the biggest breakout stars of 2011—not just in jazz, but in all genres of music. Her receipt of the 2011 GRAMMY®for Best New Artist was unprecedented—the first time a jazz musician had won the award— but Spalding continues to make the unprecedented the norm.

Born in Portland, Oregon, Spalding grew up in a single-parent home and learned early lessons in the meaning of perseverance and moral character from the role model whom she holds in the highest regard to this day – her mother.

But even with a rock-solid role model, school did not come easy to Spalding, although not for any lack of intellectual acumen. She was both blessed and cursed with a highly intuitive learning style that often put her at odds with the traditional education system. On top of that, she was shut in by a lengthy illness as a child, and as a result, was home-schooled for a significant portion of her elementary school years.

However, the one pursuit that made sense to Spalding from a very early age was music. At age four, after watching classical cellist Yo Yo Ma perform on an episode of Mister Rogers’ Neighborhood, the roadmap was suddenly very clear. “That was when I realized that I wanted to do something musical,” she says. “It was definitely the thing that hipped me to the whole idea of music as a creative pursuit.”

Within a year, she had essentially taught herself to play the violin well enough to land a spot in The Chamber Music Society of Oregon, a community orchestra that was open to both children and adult musicians. She stayed with the group for ten years, and by age 15, she had been elevated to a concertmaster position.

But by then, she had also discovered the bass, and all of the non-classical avenues that the instrument could open for her. Suddenly, playing classical music in a community orchestra wasn’t enough for this young teenager anymore. Before long she was playing blues, funk, hip-hop and a variety of other styles on the local club circuit. Her first band, Noise for Pretend, expanded Spalding’s musical horizons and presented her earliest opportunities to sing and write music.

At 15, Spalding left high school for good. Armed with her GED and aided by a generous scholarship, she enrolled in the music program at Portland State University. “I was definitely the youngest bass player in the program,” she says. “I was 16, and I had been playing the bass for about a year and a half. Most of the cats in the program had already had at least eight years of training under their belts, and I was trying to play in these orchestras and do these Bach cello suites. It wasn’t really flying through the material, but if nothing else, my teachers were saying, ‘Okay, she does have talent.’”

Berklee College of Music was the place where the pieces all came together and doors started opening. After a move to the opposite coast and three years of accelerated study, she not only earned a B.M., but also signed on as an instructor in 2005 at the age of 20 – an appointment that has made her one of the youngest faculty members in the history of the college. She was the 2005 recipient of the prestigious Boston Jazz Society scholarship for outstanding musicianship.

In addition to studying and teaching at Berklee, Spalding also had a chance to perform with many jazz icons, including pianist Michel Camilo, singer Patti Austin, guitarist Adam Rogers, and saxophonists Donald Harrison and Joe Lovano. “Working with Joe was terrifying,” she recalls, “but he’s a really generous person. I don’t know if I was ready for the gig or not, but he had a lot of faith in me. These years playing with him have been an amazing learning experience.”

Spalding has gone through several phases, which have been well documented during her brief recording career. Her journey as a solo artist began with the 2006 release of Junjo, on the Spanish label Ayva Music, which featured pianist Aruán Ortiz and drummer Francisco Mela. She presented the many different sides of her writing on Esperanza, her 2008 international debut recording for Heads Up, a division of Concord Music Group, which quickly topped Billboard’s Contemporary Jazz Chart and became the year’s best selling album worldwide by a new jazz artist. Numerous awards and appearances followed, including an invitation by President Barack Obama to appear at both the White House and the Nobel Peace Prize Ceremony, and an appearance on the Late Show with David Letterman that found Letterman and bandleader Paul Shaffer proclaiming the young musician the “coolest” guest in the three-decade history of the program.

“The objective of Esperanza was to show many sides of my musical personality,” Spalding explains; “but I also imagined that my next records would be built around a more concrete project-concept.” What followed, Chamber Music Society from 2010 and her newly released Radio Music Society, made it clear that her initial triumphs were just the beginning.

“Originally I conceived the two albums as a double record, with intimate, subtle explorations of chamber works on one and jazz musicians exploring melodies, grooves and song associated with what we categorize as ‘pop-songs.’ Those are the two ways of looking at music that really interest me.”

Returning to her ever-expanding book of musical sketches, “taking my notes and organizing them into something coherent,” Spalding began with Chamber Music Society, the 2010 release on which the bassist was joined by longtime colleagues Leo Genovese (keyboards) and Terri Lyne Carrington (drums), plus percussionist Quintino Cinalli, vocalists (including the legendary Milton Nascimento) and a string trio (arranged by Gil Goldstein and Spalding). The disc was another instant chart topper and gained multiple awards, none more imposing than the Best New Artist GRAMMY®.

Spalding’s latest release, Radio Music Society, expands the cast to include, among many others, jazz legends Lovano, Jack DeJohnette and Billy Hart; hip-hop giant Q-Tip, Algebra Blessett, Lalah Hathaway, Gretchen Parlato and Lionel Loueke, among an array of notable vocalists; and Portland mentors Scroggins and Memory, as well as the horn section of Memory’s American Music Program ensemble. “I’ve had the honor and blessing of working with so many phenomenal jazz musicians over the years,” Spalding explains, “As I’ve gotten to know them and their music, I’ve grown to love them as family and colleagues. I wished for an opportunity for us all to interpret songs together, so that they can be heard and received by a larger audience. All my personal heroes who are revered in the jazz world – like Joe Lovano and Terri Lyne Carrington – should be heard by a mainstream audience, because what they manifest in their music is so beautiful, sincere and uplifting. I think they literally bring good into the lives of the people who hear them”.

Spalding continues to spread her message around the globe. In addition to over 110 Chamber Music Society concerts, she still found time to tour with Joe Lovano’s US 5, perform at Rock In Rio with Milton Nascimento, play at Prince’s “Welcome 2 America” tour and join Wayne Shorter in celebrating Herbie Hancock’s 70th birthday at the Hollywood Bowl in Los Angeles. As Jeff Baker of The Oregonian once raved of her electrifying talent, “This was about art, performed at the highest level by someone with the vision, talent, and determination to make it happen”