Michaela Rabitsch, singer, composer and Austria’s only and top female jazz trumpet player and her ingenious partner – composer and guitar player Robert Pawlik are pleased
to release their junior release Moods. This album presents ten songs
that reflect the passion, energy and emotions of their life.

Moods is their first recording with exclusively original compositions presented by both leaders, reflecting the core of their current work. The album was recorded and mixed in
their private studio, which they try to optimize always according to
their needs, constantly looking for and achieving the ultimate sound
using vintage and only the finest gear in recording.

In the past both focused a lot on the standard repertoire – Michaela more on the Jazz repertoire and Robert more on funky and fusion side of music.

For more than ten years now they have shared their private and musical lives, playing together in their jazz quartet and their acoustic duo, writing for both groups and playing concert
tours together.

The fact that they studied extensively the Jazz standard repertoire and a lot of Jazz related music genres gives them a rich musical vocabulary to draw from. Listening to their music
will always bring new horizons to your listening palette.

Together they have developed a rich and eventful style, never trying to be purist’s only, but always looking for the core message of each song they are writing or playing, and how they
can express it best.

The fact, that Michaela is a trumpet player and singer at the same time gives her an extra venue of possibilities in expression and interpretation. “The fact that I can choose to sing or
to play a tune on the trumpet helps me to get to the essence of each
tune and it’s mood.”

As international touring artists, Michaela and Robert have performed at Festivals and Jazz Clubs not only in their home country Austria, but also in Germany,
Switzerland, The Czech Republic, Croatia, Slovakia, Bulgaria, Romania,
Israel, Italy, Serbia, Slovenia, Montenegro, Greece, Russia, Iran and
China.
Posted by Jazz n Bossa at 9:51 PM No comments:

Jazz musicians are blessed with the desire and ability to play a genre that has a history as rich as its sound. All the greats, past and present know that it’s not enough to simply play the notes, one has to live the music and feel it with every breath. When Mack Avenue recording artist, Tia Fuller picks up her sax to play, the two become one and something amazing happens as the notes and reverberations of her musical elixir fill the room. Suddenly, everything in the universe feels right and it’s easy to see and hear why this artist and teacher, who has a Bachelor of Arts degree in Music from Spelman College in Atlanta, GA, (Magna Cum Laude) and Master’s degree in Jazz Pedagogy and Performance from the University of Colorado at Boulder (Summa Cum Laude), was selected to be a member of the all-female band touring with R&B star, Beyoncé. As part of the I AM..Sasha Fierce and Beyoncé Experience World Tour promoting the superstar’sCD’s, Tia has played in various venues throughout the US, Europe, Africa, Asia and Australia. She is a featured soloist on the Beyoncé Experience DVD (Me, Myself and I) and also appeared on number of major television shows, such as The Oprah Winfrey Show, Today Show, Good Morning America, BET Awards, American Music Awards and Total Request Live.


An accomplished performer in her own right, Tia has recorded three CDs with her quartet. The first, Pillar of Strength (2005/Wambui), received praise as being "an exhilarating work that introduced her as a leader who strives for perfection" (Terrell Holmes, All About Jazz Magazine). Her sophomore release, Healing Space (2007/Mack Avenue), is an offering of “melodic medicine” that the wide-eyed optimist sincerely hopes will serve as a healing agent for those who indulge in it. Tia will be releasing her third CD “Decisive Steps”, Jan. 2010, which will be her second offering under the Mack Avenue label. Her quartet was recently featured at Oris Watches/ Time Tourneau building for WBGO’s jazz festival. Tia can also be seen performing regularly with a number of bands, including the Ralph Peterson Septet, the T.S. Monk Septet, the Jon Faddis Jazz Orchestra, the Rufus Reid Septet, the Sean Jones Quintet, the Nancy Wilson Jazz Orchestra, and Wycliff Gordan Septet.


The dynamic saxophonist has been featured in Jazz Improv Magazine, Rocky Mountain News, The Philadelphia Tribune, The Star Ledger, Downbeat Magazine and many other print and online publications. In addition to receiving numerous awards and marks of distinction, Tia was honored to be the keynote speaker at the Jazz Institute of New Jersey’s 2003 graduation ceremony, where she presented her “Journey to Success” speech. She also be featured solist playing “The National Anthem” for Detroit Tiger Stadium in Sept. 2009. Also, in January 2008, she had the privilege of participating in a press conference with pianist and composer, Danilo Perez and the Governor of the Republic of Panama, Carlos A. Villarino.

Tia believes her passion for teaching and inspiring students is in her genes because her parents were educators/administrators in the Denver Public School District. As a devoted educator, she presents lectures and teaches ensembles and masterclasses at some of the most respected institutions in the country, including Stanford University’s “Jazz Workshop,” the University of Idaho’s Lionel Hampton Jazz Festival, New Mexico State University, the IAJE Jazz Convention, Purchase College, WBGO’s “Children in Jazz” Series, Duquesne University and Panama Jazz Festival.


Tia moved to Jersey City, NJ two days before the events of September 11, 2001. Despite the fact that the jazz community believed there was not much work in the area during that period, she wasn’t discouraged and used the tragic event as a reason to succeed. She got her first gig playing in a big band at a fish fry in South Jersey. Brad Leali, who was playing in the Count Basie Orchestra at the time, spread the word that Tia was a skillful saxophonist who also played the flute. This brought her to the attention of others in the jazz community, including Gerald Wilson, Jimmy Heath, Don Braden and Don Byron, which led to her performing with a number of luminaries in the world of jazz.


With music in her blood and a song in her heart, Tia was born in Aurora, Colorado to jazz musicians, Fred and Elthopia Fuller. Her father, Fred plays bass and her mother, Elthopia sings. She grew up listening to her parents rehearse in the basement of their home, as well as the music of jazz greats, such as John Coltrane, Sarah Vaughn and Charlie Parker. I


Inspired by her older sister, Shamie, Tia began playing classical piano when she was just three years old and continued until she was thirteen. She also began studying the flute when she was nine. Her interest in jazz came into fruition in high school. It was during this time that she began playing the saxophone.

The Colorado native, who now resides in Essex County, New Jersey, says playing music makes her feel as if she is a vessel for the Spirit to flow through. While listening to her songs, she wants people to be uplifted and experience a sense of restoration, compelling them to move forward not in fear, but in love and faith.
Posted by Jazz n Bossa at 8:23 PM No comments: 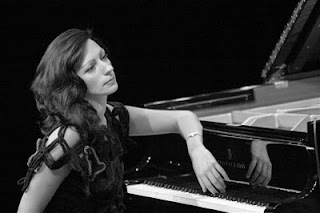 http://www.aminafigarova.com
Amina Figarova is without doubt one of the most productive jazz composers
and talented jazz piano players from Europe. Amina started playing piano
and composing at a very early age. She studied as a classical concert
pianist at the Baku Conservatory, jazz performance at the Rotterdam
Conservatory and the Berklee College of Music in Boston. Amina made
her recording debut with Attraction in 1994, and was accepted into the
prestigious Thelonious Monk Jazz Colony in Aspen, Colorado in 1998.

With her husband multi-flutist Bart Platteau
central to the three horn frontline Ms. Figarova arranges for her sextet,
she plays compelling, artful and heartfelt changes on the urbane, bluesy
lyricism originally developed by the likes of Miles Davis, Horace Silver,
Bill Evans, Herbie Hancock, Wayne Shorter, et al. Though the recipient
of rigorous Russian musical education in the classics, Amina has come
to identify her sound with these master mainstream-progressives of recent
jazz decades after having explored aspects of the avant garde (in September
Suite, her shocked and sad response to terrorists attacks on American
soil) and multi-keyboard fusion-oriented funk (on Another Me).


On the CD Above the Clouds (Munich Records) one of the most cosmopolitan and accomplished artists in jazz today proves
that the music is a natural not a national language. Amina Figarova,
the globe-trotting Azerbaijan-born, Rotterdam-based composer-pianist-bandleader
with more than a dozen recordings to her credit has created a new album
of original songs that refresh the classic post-bop idiom established
by labels such as Blue Note, Prestige and Impulse! during the 1950s
and 1960s. Far from derivative or concept-conscious, though, Above the
Clouds unfolds as a personal, vividly colored, confidently-propelled
contemporary soundtrack, satisfying in and of itself.


Amina is stylistically wide-ranging, unwilling
to be pinned down, but most of her compositions on Above the Clouds
continue in the direction she set forth on Come Escape With Me, a 2005
release which reached top 10 status on the Jazzweek radio airplay charts
(two tracks preview her next project, a suite for nonet). Throughout
the entire album Amina's measured, graceful, touching pianism and cooly-controlled
ensemble writing demonstrate commitment and ease with a jazz idiom.