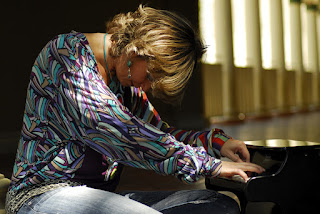 A native of San Juan, Puerto Rico, Brenda Hopkins Miranda is the consummate musician, having excelled as pianist, composer, arranger, improviser, band leader, writer and educator. She holds a Bachelors degree in Classical Piano from the Conservatorio de Música de Puerto Rico, a Masters degree in Contemporary Improvisation from New England Conservatory in Boston, and completed Doctoral Studies in Musicology from the Universidad de Granada in Spain. From 2003-2006 Hopkins Miranda was appointed Director of the Music Program of the Institute of Puerto Rican Culture. She has also been on the staff at the Inter American University Metropolitan Campus, where she taught improvisation, piano, harmony and other courses. She has been an active mentor in master classes, seminars and workshops at diverse institutions and taught privately. As an academic author her music related articles have been published in various newspapers and magazines.

Having grown up with the magical blend of rhythms and melodies which encompasses Puerto Rican music, she developed her innate talent and expanded her repertoire to include Caribbean, Latin American,with authentic Spanish and flamenco influences as well. She has been active as a first call pianist for a host of Latin American artists on international tours and recording dates, and is a recognized composer and artist on soundtracks for several short films. As a bandleader Hopkins Miranda has released three recordings of original music on her BHM label: “Boricua on Board,” (1998) “Bohemia,” (1999) and her latest effort which was a culmination of her years in Spain, the 2009 release of “Recuerdos de Granada/Memoirs of Granada.”

It was while in studying in Granada, Spain that Ms. Hopkins began to seek out the nightlife and music of the city. With her background and experience, it was inevitable that she would wind up sitting in on jam sessions like those at the famed Booga Club, leading to her forming her own Latin jazz ensemble called Zona Boricua, in honor of her Puerto Rican roots. This opened up more venues of engagement as in the ancient Albayzin part of the city, where she teamed up with Raiz and Duende a local flamenco dance show known locally as tablao, and her immersion into this classical Spanish art form was complete. Then the music took over.

Over the next two years she continued to hone her skills and absorb the flamenco culture while concentrating on composing and forming the ideas which would lead to “Recuerdos de Granada/Memoirs of Granada.”

Upon her return to Puerto Rico she set out to assemble the musicians for the recording project and in June of 2009 went into the studio to make this a realization of a purpose. This record would be not only her own reminisces of her time in Granada, but a way to show appreciation and gratitude to those she encountered, assisting, and encouraging her on her musical sojourn in the city.

In her own words “Recuerdos de Granada/Memoirs of Granada, is the story of those two years. To show how everything you live, you experience, you hear, influences you as a person and artist. It is about realizing that we are not as separated as it seems that there is more that brings us together than what seems to keep us apart. To once again let the south of Spain and Puerto Rico meet musically... my music is all about being honest and sharing who I am at the moment, and right now this was the latest experience that deeply touched me.”

by James Nadal for “All About Jazz”

There the Eye Goes Not, Michael Bullock Quartet (Tautology 2001) Pianist

The Already and the Not Yet, James Falzone Septet (2000) Pianist

Chosen artist of the week by the jazz sites: Jazz N’ Bossa and VID90 Jazz.

Pianist and composer for the flamenco show in Granada, Spain, “Raíz y Duende” for a year and a half, which was part of the Festival Patrimonio Flamenco 2008, organized by the Granada City Council.

Pianist, composer and leader of her own groups including the Brenda Hopkins Miranda Group, Zona Boricua, Rumba con Piano, Daydream, Island Project and others.

Performed as a group leader in music festivals in Puerto Rico, United States, Central and South America and Spain, including the XXVII Festival Internacional de Jazz de Granada and the I Festival Intercultural de Motril “Entreculturas”.

Chosen to be the opening act for Jerry González and Jorge Pardo at La Telonera in Spain and guest pianist for the Conservatorio Profesional de Música “Ángel Barrios” Big Band. She performed in Spain with international artists Dan Ben Lior, Toto Fabris, Rachel Maduri and others.

Included in a documentary about foreigners living in Andalucía presented by Spanish TV channel Canal Sur.

Invited to perform for the Dalai Lama on his first visit to Puerto Rico in 2004.

Appointed Director of the Music Department of the national government agency Instituto de Cultura Puertorriqueña, administrated the Banda Estatal de Puerto Rico, produced many recordings, concerts, wokshops, seminars and was a member of the Board of Editors of the music magazine, Resonancias.

Offeres workshops, conferences, seminars and master classes on a variety of themes including: creativity, jazz, instrument performance, piano, improvisation, composition and arranging, the art of practicing, and music business at different institutions, universities and schools.