Jazz and Bossa Artist of the Month (October 2012) - Jerry Gonzalez 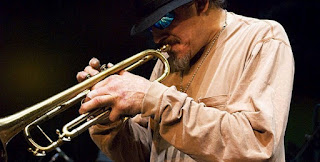 Born 5 June 1949, New York City, New York, USA. Multi-instrumentalist Gonz lez and his Fort Apache Band are one of the most exciting Latin jazz ensembles to emerge in the 90s, fusing the rhythms of Cal Tjader, Tito Puente and Eddie Palmieri with a fiery bebop horn section, with Gonz lez featuring on trumpet and percussion. He started off playing congas in a Latin jazz quintet alongside his bass-playing younger brother Andy, and attended the New York High School Of Music And Art and the New York City College Of Music. He joined Dizzy Gillespie's band as a percussionist, and then played for four years with Palmieri during which he was able to nurture his interest in Afro-Cuban rhythms. Gonz les left Palmieri to form the influential progressive salsa band Libre with his brother and timbales player Manny Oquendo.

Gonz lez continued to develop his jazz and rumba fusion experiments with a series of informal basement sessions at his mother's house in the Bronx, attended by a stellar cast of musicians including Kenny Dorham, Woody Shaw, Alfredo De La F‚, Alfredo Rodriguez, Eddie Mart¡nez and Wilfredo Velez. These sessions resulted in two all-star albums by the influential Grupo Folklorico y Experimental Nuevayorquino. In 1979 Gonz lez was given the opportunity to transfer his fusion experiments to vinyl when he was signed to the American Clav‚ label as a solo artist by producer Kip Hanrahan. He made his solo debut with the notable Ya Yo Me Cur‚ in 1980, backed by sidemen including trombonist Steve Turr‚, tenor saxophonist Mario Rivera, pianist Hilton Ruiz and singer Frankie Rodriguez on a mixture of Afro-Cuban originals and jazz standards by Wayne Shorter, Duke Ellington and Thelonious Monk (a remarkable reading of "Evidence"). A European tour followed, with Gonz lez's ensemble hastily named the Fort Apache Band (taken from the 1981 movie Fort Apache, The Bronx). Gonz lez made his recording debut with the Fort Apache Band on The River Is Deep, which was recorded at the Berlin Jazz Festival in November 1982.

Gonz lez left Libre at the end of the 80s to devote his energies to band leading. In 1989, he released Obatal and Rumba Para Monk. On the latter album, an Afro-Cuban Monk tribute, Gonz lez scaled his band down to a quintet comprising his brother, pianist Larry Willis, percussionist Steve Berrios and tenor Carter Jefferson. In November 1990, the Fort Apache Band made their UK debut with an outstanding concert at London's Empire Ballroom. With the addition of alto saxophonist Joe Ford, Gonz lez's sextet recorded two more acclaimed albums on the Sunnyside label. Jefferson died in 1993 and was replaced by the experienced John Stubblefield. The current line-up of the band has released several albums on Milestone Records that have helped firmly establish them at the forefront of Latin jazz.