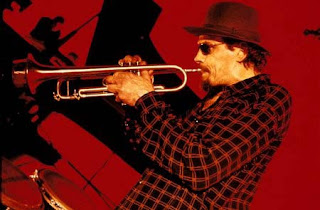 Jerry González was born in 1949 in Manhattan, on 58 street and 3ª Avenue, and moved to the Bronx at the age of 4. He was raised in a strong musical atmosphere, with the strains of Latin, Afro-Cuban and jazz music always in his ear, establishing his musical appreciation and molding his future work as an artist. His father, Jerry González Sr. was a master of ceremonies and lead singer for bands during the Palladium era and sang with musicians like Claudio Ferrer. In junior high school he began playing trumpet and congas and jamming with local bands. After deciding this was his calling, Gonzalez completed his formal studies at New York College of Music and New York University. He started his professional career playing with Lewellyn Mathews in New York State World's Fair in 1963. Then, in 1970, he started playing congas with Dizzy Gillespie. With Gillespie’s support and encouragement, Gonzalez was able to fuse the African based rhythms onto jazz elements without compromising the essence of either. The next year, Gonzalez joined Eddie Palmieri’s band till 1974, before moving on to work with “Conjunto Libre” the band led by great timbales artist Manny Oquendo and Andy González. He and his brother the bass player Andy Gonzalez were the fundators of the Conjunto Anabacoa and later of the charismatic Grupo Folklórico y Experimental Nuevayorkino with whom he made two records: Concepts of Unity (1974) and Lo Dice Todo (1975). The band members were: Jerry and Andy González, Frankie Rodríguez, Milton Cardona, Gene Golden, Carlos Mestre, Nelson González, Manny Oquendo, Oscar Hernandez, José Rodríguez, Gonzalo Fernández, Alfredo "Chocolate" Armenteros, Willy García, Heny Álvarez, Virgilio Martí, Marcelino Guerra, Rubén Blades, Orlando "Puntilla" Ríos and Julito Collazo.


Inevitably, Gonzalez talent led him to form his own band. His initial was taken in the late 1970’s with a band he called “Ya Yo Me Cure” and released an album of the same name in 1979. No doubt, his real talent only came to the fore with his second band: “Jerry Gonzalez and the Fort Apache Band” which included his brother Andy and other members as Kenny Kirkland, Sonny Fortune, Nicky Marrero, Milton Cardona, Papo Vazquez and the late Jorge Dalto. The ensembles first two albums were recorded live at European jazz festivals, “The River is Deep” in 1982 in Berlin and “Obatalá” in 1988 in Zurich. These were followed by their hit album, "Rumba Para Monk,” in 1988, earning them recognition from the French Academie du Jazz with the “Jazz Record of the Year” award. This was the record that caught the ears of the jazz community, and is still considered a stellar project. After that, the 15 members band was compressed into a sextet: Larry Willis (piano), Andy González (bass), Steve Berrios (Drums) and Carter Jefferson (sax) and Joe Ford (sax).

Gonzalez and the band subsequently released "Obatalá" (Enja, 1988), "Earthdance" (Sunnyside,1990) and "Moliendo Café” (Sunnyside, 1991). These albums again demonstrated the band’s ability to play Latin inspired jazz with genuine sensitivity and virtuosity. After "Moliendo Café", Carter Jefferson passed away and was replaced by John Stubblefield. They then released "Crossroads” in 1994 and "Pensativo” in 1995, each of which earned them Grammy nominations. The ensemble was awarded The Beyond Group of the Year by both Down Beat Magazine reader's and critic's polls in 1995 and 1996.

Gonzalez and group continued their creations on the 1996 album "Fire Dance,” recorded live at Blues Alley, and featuring interpretations of Thelonious Monk as "Let’s Call This” and "Ugly Beauty,” as well as original compositions. Their efforts were well compensated by winning a score of awards as; Best Jazz Group in Playboy Magazines Readers Poll for 1997. In 1998 they swept the Latin Jazz category at the New York Jazz Awards winning both the Industry and Journalist Polls. In 1999 the group scored big with the critics and readers polls for Beyond Group of The Year in Down Beat Magazine.

Jerry Gonzalez & the Fort Apache Band offered a tribute to Art Blakey and the Jazz Messengers on their 2005 release “Rumba Buhaina”. That was their first record as a quintet, without John Stubblefield, who passed away in 2005. The band is still alive and functioning. In 2008, the Heineken Festival paid tribute to Jerry González and his brother Andy González, the first Puertoricans to be honored by the Heineken Festival.


In 2000 González relocated to Madrid. The trumpeter went to Madrid for just one day during a tour with Calle 54 movie and ended up living there. He immersed himself in the flamenco scene and started to develop a new concept with the genre that would blossom in the future. His hiatus in Madrid resulted in the production of “Los Piratas Del Flamenco” (2004) a band and album that included the flamenco guitarist Niño Josele, the percussionist Israel Suárez "Piraña" and the singer Diego “El Cigala”. A novel approach is evident, as it was done without bass, without drums or piano, a radically new sound, a fusion of jazz and flamenco but with a twist. The album was nominated to the Grammy Awards as best Latin jazz album and won the Critics Award in New York as best Latin-jazz album of the year. He has also played with other flamenco musicians such as Enrique Morente, El Negri, Javier Limón and Paco de Lucía, copla musicians like Martirio and Pilar Boyero and pop musicians living in Spain like the Argentinean Andrés Calamaro. Jerry González latest albums have been "A primera vista" (duet with Federico Lechner, 2002), "Music for Big Band" (Youkali/Universal, 2006) and "Avísale a mi contrario que aquí estoy yo" (Cigala Music/Sunnyside, 2010-2011), recorded with "El comando de la clave", Jerry's quartet in Spain, which includes the Cubans Alain Pérez (bass), Javier Massó "Caramelo" (piano) and Kiki Ferrer (drums). His next projects are an album with the Spanish double-bass player Javier Colina and a tribute album to Los Muñequitos de Matanzas. 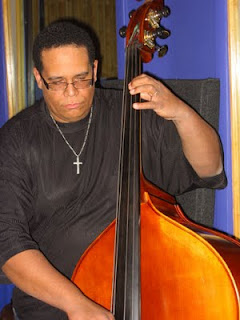 By age nineteen, John was the first-call bassist in San Juan's thriving Jazz and Latin music scenes. He performed with, among others, such well-known artists as Chick Corea, Lucecita Benitez, Batacumbele, Lalo Rodriguez, Cuco Peña, Roberto Roena, and Justo Betancourt. In his early twenties, he toured with Batacumbele to Columbia, South America where he continued to play and study music. Always in demand, John was asked to play with some of the top names in the country like Joe Madrid and often accompanied international touring artists like trumpeter “Chocolate” Armenteros.

John has participated in two instructional videos with master percussionist Giovanni Hildalgo and Cuban drummer Ignacio Berroa. He can also be seen on the national tv and cable shows, Good Morning America, The Today Show and BET On Jazz.

As a sideman and a featured special guest, John has performed in all of the major jazz festivals and venues around the world including Turkey, Jordan (where he played for the royal family), South America, Canada, Norway, Finland, and all over Europe. John was chosen by the United States Information Agency and the Kennedy Center to represent the United States as a Jazz Ambassador on a tour of South America.

John has played and recorded with some of the finiest Jazz, Latin, and R&B musicians and has learned something from each and every one of them. This diversity of influence and experience is reflected in his latest project and first recording as a leader, “Descarga in New York,” released in August 2001 on Khaeon World Music. Together with his Trio (the gifted pianist/composer Luis Perdomo and the powerhouse drummer Dafnis Preito) and special guest percussionist, Richie Flores and the tenor saxophonists Ravi Coltrane, John has created a strong musical statement which highlights his prodigious talents as a bassist--both acoustic and electric-composer, arranger, and and producer.

Benitez was the bassist on Ray Barretto’s last record “Standards Rican-ditioned,” in 2006, which was a set of jazz standards performed by an all Puerto Rican ensemble, which incidentally included the late Hilton Ruiz on piano.

Although Benitez is extremely fluid in the jazz idiom, he excels at interpreting the rhythms and styles of his native Afro-Caribbean region and the entire Pan American music book. As he puts it himself, “For me it's all the same, one great dance music, all the Caribbean, South America and New Orleans are but an extension of African music, music with that special bounce. That's what I like the most.” John Benitez, an excellent example of a true musician, an educator, artist, gentleman and a spiritual human being.
Posted by Jazz n Bossa at 10:48 AM No comments: