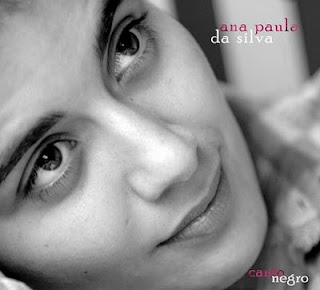 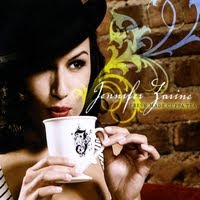 Originally from the small town of Ghent in upstate NY, Jennifer eventually performed her way through most of the county and the Capital Region. She then went on to study at the Eastman School of Music in Rochester, NY where she earned a BM in vocal performance.

Upon the completion of her classical training, Jennifer moved to New York City with a focus in Musical Theater. This focus led her to the two year intensive program at Circle in the Square Theater School. Though Jennifer always had a love for jazz, it was here where her vocal teacher suggested she give it a whirl.

After receiving her theater certificate, she began performing throughout the city singing in cabarets, off and off off Broadway shows and various jazz clubs including Kavehaz (now closed) and Mannahatta (also now closed). She promises that she is not the reason for their closing as she has also sung at plenty of venues that are still currently open!

Her debut album, Fresh Made Cuppa Tea is a dream come true... a compilation of standards and classic rock songs with a fresh jazzy twist. Jennifer’s love for her family, friends and tea were the inspiration for the album.
Posted by Jazz n Bossa at 7:46 AM No comments: 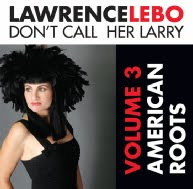 "Don't Call Her Larry, Volume 3" completes the blues trilogy Ms. Lebo has been working on with style. A brilliant collection for young and old, the songs evoke the past masters while inspiring the next wave of blues greats to follow suit. Easily the best album in the genre I have heard this year.”

Hailing form Southern California, singer/songwriter/composer LAWRENCE LEBO is an artist who is enthralled with and dedicated to American Roots Music. Her journey began with her critically acclaimed debut Ep titled “LAWRENCE LEBO and her LITTLE BIG BAND:DON‘T CALL HER LARRY ”. With the release of her first collection, LEBO interpreted eclectic 30’s and 40’s Big Band Blues, using the vehicle of an eight piece “Little Big Band” surprisingly comprised of traditional bluegrass instrumentation, creating a hybrid of Americana Blues/Jazz/Roots, with vocals extraordinaire! Ace banjoist PAT CLOUD’S Charlie Parker influenced banjo work is not to be missed. The Ep was recorded live to 2 track and originally mastered to vinyl at 45rpm. It was later re-released on CD as "DON'T CALL HER LARRY, VOL. 1". The work garnered rave international reviews. The Ep's success got the attention of NATIONAL PUBLIC RADIO who featured Ms. LEBO on the WEEKEND EDITION show, hosted by Liane Hansen.


The success of her first endeavor sparked her second release"DON'T CALL HER LARRY, VOL. 2", This time LEBO reinterprets her songbook with an acoustic quartet captured in a lice setting, comprised of vocals, guitar, bass and violin. The CD includes new tunes that showcase LAWRENCE’S songwriting and arranging talents along with her powerful vocals. LEBO swings, scats and moans her way through both originally penned compositions, and originally arranged classics that run the gamut from rocking electric blues, acoustic swing, to contemporary jazz.

In the age of trilogy, LEBO conjures a masterful offering. In “DON’T CALL HER LARRY, VOL. 3 : AMERICAN ROOTS” she continues to explore the depths of American Roots music, reinterpreting her songbook in a duet setting, featuring herself and bassist DENNY CROY (Doug MacLeod, Brian Setzer Orchestra). Stripped down to an organic setting, the stellar vocalist creates vivid imagery with her texturally diverse vocal styling. In an age where singers are manipulated with technology and slick production, LEBO goes bar-room-raw, minimal, and shows us exactly what she can do. In addition, LEBO has penned new works. They are American Roots hybrids of acoustic jazz/blues, western swing, and a heart wrenching folk tribute to the sudden loss of her dearly loved yellow Labrador Retriever, titled “Rose, Rose”. Notables contributing on the CD are PHIL PARLAPIANO (John Prine, Lowen &Navarrow, Dave Koz) on accordion, and MIKE ACOSTA (Brian Setzer Orchestra) on saxes. “DON’T CALL HER LARRY, VOL. 3 : AMERICAN ROOTS” is certain to thrill loyal LAWRENCE LEBO fans, as well as to attract new followers with its compelling ability to differentiate itself from the pack.

Ms. LEBO has worked long and hard at developing her craft. In addition to her more than 20 years experience as an accomplished vocalist, band leader and songwriter, Lawrence was driven to expand her natural talents through various educational programs. In the 1980s, she attended the vocal program at Grove School of Music in Los Angeles, California. With this educational background, a steady performance schedule and raising family, Lawrence returned to traditional academia in 2000, earning an Associate of Arts degree in music at Santa Monica College, and then transferring to UCLA to complete her Bachelor of Arts degree.


"An education at UCLA was not something I could afford,” says Lawrence. Nevertheless, she poured herself into her studies at UCLA and the hard worked paid off. Ms. Lebo received two of UCLA’s highest honors, including a Regents Scholar and a Gold Shield Alumni Scholar. Lawrence proudly notes, however, “The highlight of my experience at UCLA was getting to study Duke Ellington under Professor Kenney Burrell. It just doesn‘t get any better than that!” In the summer of 2005, Lawrence graduated from UCLA with Latin Honors. On the heels of this educational achievement, Lawrence released, DON‘T CALL HER LARRY, VOLUME 2. Currently LEBO teaches a Blues singing techniques workshop at world famous McCabe's Guitar Shop in Santa Monica.


Intellectually curious and stubbornly original, LAWRENCE LEBO continues to explore American Roots music and develop her art in ways that defy categorization. Ms. LEBO can be found performing at events, festivals, night clubs and exclusive private parties. She can be found on the world wide web at www.lawrencelebo.com For Booking Information or Press Kit contact On The Air Records at (818) 708-9565 or email at: lawrencelebo@lawrencelebo.com.
Posted by Jazz n Bossa at 10:11 AM No comments: