Jazz and Bossa Artist of the Month (February 2012): Anat Cohen 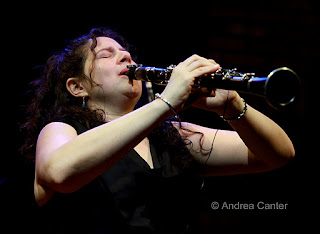 An established bandleader and prolific composer, idiomatically conversant with modern and traditional jazz, classical music, Brazilian choro, Argentine tango, and an expansive timeline of Afro-Cuban styles, Anat Cohen has established herself as one of the primary voices of her generation on both the tenor saxophone and clarinet since arriving in New York in 1999.

In September 2008, Anat Cohen released Notes From The Village, her fourth album as a leader. Recorded at Avatar studios in New York City, the album builds on Cohen's acclaimed 2007 releases, captures the thrilling energy of her live shows, and proves her to be an artistically adventurous writer and performer. Notes From The Village finds Anat leading a quartet of some of the most sought-after, engaging young performers in New York, including pianist Jason Lindner, bassist Omer Avital, and drummer Daniel Freedman, with accompaniment from guitarist Gilad Hekselman on three tracks. The album features compositions written by Cohen as well as her interpretations of songs by Fats Waller, John Coltrane, Sam Cooke and Ernesto Lecuona.

“In preparing for the recording,” says Anat “I really wanted to capture the free, risk-taking, open quality this band achieves when performing live. I also wanted to stretch my compositions, and arrangements.”

Early responses to the album have been overwhelmingly positive; The New York Times’ Nate Chinen wrote that “Notes From The Village is a resounding confirmation; yes, she is the real deal”, DownBeat Magazine awarded the release four stars, stating that “Cohen makes it seem easy, mixing a gift for melody and an improvisational fluidity that has few peers today.”

Anat’s previous outings, Noir and Poetica were released simultaneously in April 2007, inspiring a string of enthusiastic reviews. The Washington Post said that “Cohen has emerged as one of the brightest, most original young instrumentalists in jazz [...] [she] has expanded the vocabulary of jazz with a distinctive accent of her own.” The Village Voice spoke of her “Enviable insouciance” and how “she alludes to the mystical in a merry way,” and Downbeat Magazine expressed the opinion that “Noir could be a classic” and “[Cohen’s] stately intonation and unforced elegance on clarinet could take her to the top.” Noir and Poetica both appeared on many year-end best-of summary lists, including those of Paste Magazine, The New York Sun, Slate, JazzTimes and others.

Ms. Cohen’s accomplishments have been recognized in a flurry of awards and distinctions from critics and fans alike; In 2011 she was the winner of both DownBeat Magazine’s critics poll and Reader’s Poll in the Clarinet category, She topped the Rising Star-Clarinet category from 2007 through 2010, and in 2010 she won DownBeat Critic’s poll for both Rising Star Jazz Artist and Rising Star Jazz Soprano Saxophone. The Jazz Journalists Association named Anat Cohen Clarinetist of the Year from 2007 through 2011 – the first time in the history of the awards that an artist has earned top clarinet honors five years running.

Born in Tel Aviv, Israel, Anat grew up with musical siblings; her older brother Yuval is himself a saxophonist of note, and her younger brother, Avishai, is one of New York’s busiest trumpeters. She began clarinet studies at age 12 and played jazz on clarinet for the first time in the Jaffa Conservatory’s Dixieland band. At 16, she joined the school’s big band and learned to play the tenor saxophone. The same year, Anat entered the prestigious “Thelma Yelin” High School for the Arts, where she majored in jazz. After graduation, she discharged her mandatory Israeli military service duty from 1993-95, playing tenor saxophone in the Israeli Air Force band.

In 1996, Anat matriculated at Berklee College of Music in Boston. There she met faculty member Phil Wilson, who encouraged her to play clarinet, and other inspiring teachers such as Greg Hopkins, Ed Tomassi, Hal Crook, George Garzone, and Bill Pierce, and an elite international peer group of students.

During her Berklee years, Anat visited New York during breaks between semesters, making a beeline for Smalls to soak up the hybrid of grooves, world music and mainstream jazz that people like Jason Lindner and Omer Avital were then evolving. Back in Boston, she played tenor saxophone in a variety of musical contexts with various bands including Afro-Cuban, Argentinean, klezmer, contemporary Brazilian music and classical Brazilian choro. Anat also began her association with Sherrie Maricle’s top-shelf all-woman big band Diva Jazz Orchestra, which continued into the new millennium.

Anat documented her bona fides on her debut CD, Place and Time, one of All About Jazz-New York’s “Best Debut Albums of 2005.” On the liner notes for Notes From the Village, Ira Gitler writes “She is formidable. Long may she continue to enrich the music in myriad ways.” There is every indication that her star will continue to rise for a long time to come.

Anat Cohen’s Clarinetwork Live at the Village Vanguard album, released April 2010, inspired by Benny Goodman and celebrating his centennial, is a musical tour-de-force. Cohen leads an all star rhythm section (Benny Green, Peter Washington, Lewis Nash ) on this exquisite live recording that returns the clarinet to its rightful role at the forefront of jazz. Winner of five consecutive Jazz Journalists Association “Clarinetist of the Year” awards and winner of DownBeat critic’s & Reader’s polls in the clarinet category (2011) Anat Continues to perfrom around the world in Various musical settings.

Jazz and Bossa Artist of the Month: Hiromi (January 2012) 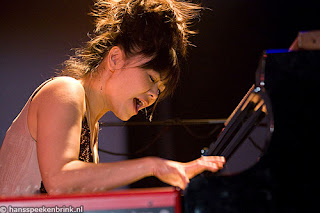 Hiromi Uehara first mesmerized the jazz community with her 2003 Telarc debut, Another Mind. The buzz started by her first album spread all the way back to her native Japan, where Another Mind shipped gold (100,000 units) and received the Recording Industry Association of Japan's (RIAJ) Jazz Album of the Year Award. The keyboardist/ composer's second release, Brain, won the Horizon Award at the 2004 Surround Music Awards, Swing Journal's New Star Award, Jazz Life's Gold Album, HMV Japan's Best Japanese Jazz Album, and the Japan Music Pen Club's Japanese Artist Award (the JMPC is a classical/jazz journalists club). Brain was also named Album of the Year in Swing Journal's 2005 Readers Poll. In 2006, Hiromi won Best Jazz Act at the Boston Music Awards and the Guinness Jazz Festival's Rising Star Award. She also claimed Jazzman of the Year, Pianist of the Year and Album of the Year in Swing Journal Japan's Readers Poll for her 2006 release, Spiral. Hiromi continues her winning streak with the 2007 release of Time Control and in 2008, Beyond Standard. Both releases feature Hiromi's super group, Sonic Bloom.

Born in Shizuoka, Japan, in 1979, Hiromi took her first piano lessons at age six. She learned from her earliest teacher to tap into the intuitive as well as the technical aspects of music.

Hiromi took that intuitive approach a step further when she enrolled in the Yamaha School of Music less then a year after her first piano lessons. By age 12, she was performing in public, sometimes with very high-profile orchestras. "When I was 14, I went to Czechoslovakia and played with the Czech Philharmonic," she says. "That was a great experience, to play with such a professional orchestra."

Further into her teens, her tastes expanded to include jazz as well as classical music. A chance meeting with Chick Corea when she was 17 led to a performance with the well-known jazz pianist the very next day.

"It was in Tokyo," Hiromi recalls. "He was doing something at Yamaha, and I was visiting Tokyo at the time to take some lessons. I talked to some teachers and said that I really wanted to see him. I sat down with him, and he said 'Play something.' So I played something, and then he said, 'Can you improvise?' I told him I could, and we did some two-piano improvisations. Then he asked me if I was free the next day. I told him I was, and he said, 'Well, I have a concert tomorrow. Why don't you come?' So I went there, and he called my name at the end of the concert, and we did some improvisations together."

After a couple years of writing advertising jingles for Nissan and a few other high-profile Japanese companies, Hiromi came to the United States in 1999 to study at the Berklee College of Music in Boston. For as open as her musical sensibilities had already been when she came to the U.S., the Berklee experience pushed her envelope even further.

Among her mentors at Berklee was veteran jazz bassist Richard Evans, who teaches arranging and orchestration. Evans co-produced Another Mind, her Telarc debut, with longtime friend and collaborator Ahmad Jamal, who has also taken a personal interest in Hiromi's artistic development. "She is nothing short of amazing," says Jamal. "Her music, together with her overwhelming charm and spirit, causes her to soar to unimaginable musical heights."

At 26, Hiromi stands at the threshold of limitless possibility, constantly drawing inspiration from virtually everyone and everything around her. Her list of influences, like her music itself, is boundless. "I love Bach, I love Oscar Peterson, I love Franz Liszt, I love Ahmad Jamal," she says. "I also love people like Sly and the Family Stone, Dream Theatre and King Crimson. Also, I'm so much inspired by sports players like Carl Lewis and Michael Jordan. Basically, I'm inspired by anyone who has big, big energy. They really come straight to my heart."

But she won't, as a matter of principle, put labels on her music. She'll continue to follow whatever moves her, and leave the definitions to others.