Jazz and Bossa Artist of the Month (April 2012) - David Sanchez

Jazz and Bossa Artist of the Month (April 2012) - David Sanchez 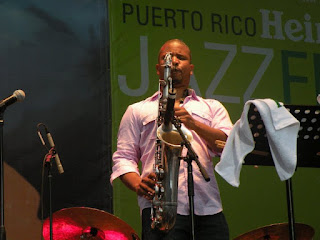 Ask a roomful of jazz fans about Grammy Award-winning saxophonist David Sánchez and the ensuing buzz will be filled with exultant praise for one of the finest saxophonists of his generation. Such comments are entirely valid, to a point. Born in Guaynabo, Puerto Rico, Sánchez is unquestionably one of the finest, most progressive players on the contemporary scene, as more than a decade’s worth of bold, brilliant work has already proven. But, is Sánchez a master of Latin Jazz or an exemplary player who also happens to be of Latin heritage? The distinction may seem subtle, but is actually profound. As noted critic Bob Blumenthal observed, “[Sánchez] has been nurturing his own distinct variety in recent years, one that draws heavily on…Miles Davis and John Coltrane and weaves rhythms in fluid strands. In a review, world-renown jazz critic Howard Reich saluted the young bandleader saying, “Technically, tonally and creatively, he seems to have it all. His sound is never less than plush, his pitch is unerring, his rapid-fire playing is ravishing in its combination of speed, accuracy and utter evenness of tone.” What results is far closer to the more daring postbop tradition than to standard Latin music.” Pose the question to Sánchez himself, and he heartily responds, “ I think the music speaks for itself. If you really listen, you’ll discover that it would be incomplete to call it Latin Jazz. But I don’t get concerned about labels. It’s like art in a museum. You see a painting and it means something to you, but it means something completely different to someone else. I know my influences and I know my direction. I just keep doing what I’m doing.”

In 2004, the recording “Coral” earned David his first Latin Grammy Award for Best Instrumental Album and his fifth Grammy Award nomination. This recording features orchestrations and arrangements by Carlos Franzetti with the City of Prague Philharmonic. After that, Sánchez concluded a seven album relationship with Sony Music. Three years of intensive writing, performing and shopping around for a new musical home followed, with Sánchez ultimately opting to sign with Concord, where his latest, and arguably most artistically progressive album, Cultural Survival, was released on May 20, 2008. Of the new relationship he’s forging with Concord, Sánchez says he finds it “very refreshing. I mean, I was allowed to include a piece commissioned by Chamber Music America’s “New Works: Creation and Presentation Program.” The highly prestigious program is made possible through the generosity of the Doris Duke Charitable Foundation [the album closing “La Leyenda del Cañaveral]. The piece is set to a poem and extends to 20 minutes - that’s how supportive the label is. To me it’s all great news.”

Explaining Cultural Survival’s intriguing title, Sánchez says, “It’s generally about the human condition. How we keep pushing ourselves away from nature instead of being part of it. How other beings are suffering from our actions, including other humans that perhaps are more sensitive, and who are in direct contact with natural events.” I love listening to NPR and especially “All Things Considered.” But I’m often left wondering, ‘where is the world going?’ You realize you’re surrounded by a new generation that seems a little unconscious, living in their own space.”

Longtime Sánchez listeners will notice significant lineup changes on Cultural Survival, most notably the absence of piano on all but three of the eight tracks and the inclusion of guitar. It was, he explains, “an idea that came from different directions. First, I was listening to a lot of African music — from southeast Cameroon, [Baka Forest people], from Ethiopia [Ari people] and also music from Mali. The Ngombi [eight string instrument use by the Baka] and the Shungi [Ari for the Lyre] are very strong influences for this album and the reason why I added guitar, especially on the first tune [“Coast to Coast”], and the final one [“La Leyenda del Cañaveral”].

Also, I had the chance to work with Pat Metheny. He called me at the last minute to join his trio on tour as a special guest. Never before in my career had I worked with a guitarist on such a consistent basis. It was so fun. How you react to harmony is different, and you can go in so many directions. It’s more linear than horizontal, and it can really open things up. I had already written a lot of music with piano doubling but I wanted more of the guitar sound.”

As for his choice of guitarist, Sánchez says he was “impressed with Lage the first time I heard him. A lot of people focus more on a player’s ability and technical skills, but for me the most vital part of technique is the sound, and Lage’s sound is the first thing that attracted me. Ben [Street] knew I’d been talking about making a change to incorporate guitar, so he said ‘you’ve got to check this guy out.’ I called Lage, and he gave a great audition. Working with guitar is something I’ve only been doing for about a year, but it has enormous potential to grow in so many ways.

Of the albums’ two guest pianists, Robert Rodriquez, who appears on “La Leyenda del Cañaveral,” is, says Sánchez, “from a younger generation, and I was very impressed with him. His skill [and] musicianship are very strong. He did an unbelievable job. He came very prepared, and is a guy who is willing to commit everything to the music.” As for Pérez, Sánchez enthuses that “he is like my brother. We’ve known each other for such a long time, and having him on the album was a real treat. These days, he’s extremely busy playing with Wayne [Shorter] and teaching fulltime at the New England Conservatory. So, when he said he could do it, I was like, ‘Wow! Great!’ Words can’t describe his musicianship. These days, people are easily impressed with pyrotechnics, but you don’t see too many who are impressed with the ability to respond to any type of music. Danilo has that. It takes not only great ears, but also great intuition. To me, that is truly an amazing level of artistry, and it’s a blessing to have him on the recording.”

Musical Trajectory of David Sánchez Sánchez began playing percussion and drums at age 8 before migrating to tenor saxophone four years later. While a student at the prestigious La Escuela Libre de Música in San Juan, he also took up soprano and alto saxophones as well as flute and clarinet. The bomba and plena rhythms of Puerto Rico, along with Cuban and Brazilian traditions, were among the biggest influences on Sánchez’s early taste in music. Sonny Rollins, Dexter Gordon and John Coltrane had the greatest impact on his playing. “Charlie Parker is also a major influence, of course, and many, many others.”

In 1986 Sánchez enrolled at the Universidad de Puerto Rico in Rio Píedras, but the pull of New York was irresistible. By 1988 he had auditioned for and won a music scholarship at Rutgers University in New Jersey. With such close proximity to New York City, Sánchez quickly became a member of its swirling jazz scene. Some of his first New York musical experiences were with piano giant Eddie Palmieri, Hilton Ruiz and trumpeter Claudio Roditi who brought Sánchez to the attention of Jazz legend Dizzy Gillespie. In 1991, Gillespie invited the young saxophonist to join his “Live the Future” tour with Miriam Makeba. Sánchez has also performed and recorded with Kenny Barron, Roy Haynes, Charlie Haden, Lalo Schifrin, Tom Harrell and had the opportunity to perform with the legendary drummer Elvin Jones.

Whether with Gillespie, Palmieri, Haden and his other jazz mentors, or under his own name, Sánchez has continued to tour extensively, bringing his mix of mainstream jazz with Afro-Latin influences to delighted audiences throughout the globe.

David has also proven to be a compelling presence with student musicians and continues to be in demand for workshops and master classes throughout the world. Sánchez’s passion for teaching and sharing his art with up and coming musicians has led him to conduct clinics with students around the world. He works with high school students, and has led clinics and workshops with music students which often culminate in performances with student and faculty orchestras and big bands. In 2007 alone, he gave master classes in Brazil, at the Peabody Conservatory, Manhattan School of Music, Indiana University’s School of Music, University of Memphis, the University of Northern Iowa, Emory University, and Georgia State University. Sánchez has also completed year-long residencies, most recently at Georgia State University, at el Conservatorio de Música de Puerto Rico, and with the prestigious Quad City Arts program.

Concurrent with what is sure to be a crowded tour schedule, Sánchez will continue his longstanding tradition of assisting with jazz education programs. Such work, he says, “gives me great satisfaction. At the same time, it’s a real challenge, and you end up learning so much yourself. You give, but you receive too. It gives me such tremendous joy. I see so much talent out there. I am very optimistic. But the music scene has become tougher than it was before and therefore there are not enough opportunities play. There’s no real chance for [young players] to develop their music. The only way to truly develop is by playing. The history of jazz bears that out. They have lots of technical ability and knowledge but wisdom is knowledge applied, and their knowledge isn’t getting applied as it could. I think it is not enough to study music, you need to experience it to be able to understand it’s power as a way of communication.”